A peek inside the District Center for the Arts in Taunton

For the full story and 9 featured photos visit the Taunton Daily Gazette.

Inside the quirky, thriving world of tribute bands at Tauton's District Center

TAUNTON - The District Center for the Arts is on the COVID rebound and ready for the rush.

On Saturday night, Taunton's own Rose Wharf Band played their 25th anniversary show for a sold out crowd, an indication to venue founder Alex Stylos things are getting back to normal.

Before COVID, and the shutdown and many months of restrictions and confusion, the District Center had sold out 16 of 17 shows.

"We were only a year and a half old. We were on our way," Stylos said.

"Setback, reinvent, start over. We weathered that storm, like other venues. And that's really the biggest challenge right now, is hoping we can get back to where we once were,", he said.

Since opening in 2018, the District Center has become known for hosting tribute acts and the 2022 schedule is packed with tributes.

On Saturday night it was the Grateful Dead, with Rose Wharf Band taking on the Dead's classic live triple-album set, Europe '72, and the reproduction did not disappoint.

"Each year when we have our anniversary show, we try to pick a theme, try to do an album or series of albums by the Grateful Dead", said Rose Wharf guitarist Fran Fenton. "About 90% of the music we play when we play out is Grateful Dead music. That's just what we do. We've stayed true to the music that we love and we're still having fun with it 25 years later.

"We stay pretty true to the '72 album," Fenton said of that evening's undertaking. "It's just a classic album, just the epitome of wonderful live albums. It's beautiful music."

"Tonight is special," Stylos said, "because it's a real Taunton-centric crowd. Rose Wharf has played here before - this is maybe their fourth time - that's a lot for us. But we're happy to produce shows that have a special meaning to the locals, and this one certainly does."

Rose Wharf Band got started in 1995 and played its first shows at the Captains Quarter Deck on Scadding Street in Taunton. Today, Taunton resident Fenton, guitarist Tom Arieta and bassist Gregg Fitzgerald are the remaining original members. Keyboard player Greg Lee and drummer Greg Motta round out the lineup.

For the full story visit the Taunton Daily Gazette. 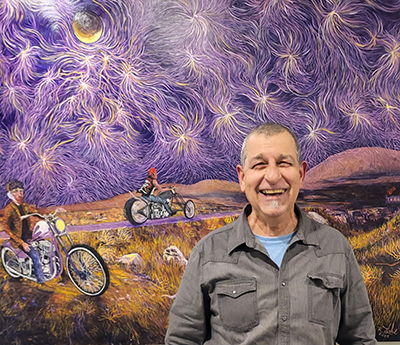 Robert Leal is an American artist who lives in and draws inspiration from southeastern Massachusetts. Bob lived through the hippies and the punks and it shows in his work- the classical mixed with pop, sly social commentary crossed with slickly confounding comedy, anarchy living merrily amongst order. In addition to his collection at the District Center and in venues throughout New England Bob has recently hung his work in the Plymouth Public Library, the Trescott Street Gallery and also another place. He had permission to hang them, no funny business.